Home>> Connect>> Ask an Engineer>> Why can’t cars run on water instead of gasoline? 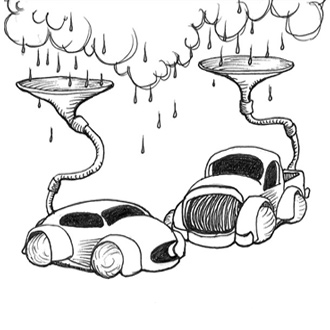 Why can’t cars run on water instead of gasoline?

Alas, water is more of a taker than a giver of energy

Using water to power cars is, unfortunately, only a pipe dream. We all know water cannot “burn” like traditional (fossil) fuels, but any hope of extracting energy from it at all, in some other way, can only be crushed by chemistry.

A water molecule contains three atoms: an oxygen atom and two hydrogen atoms, which bond together like magnets. According to Wai Cheng, a professor of mechanical engineering and director of the Sloan Automotive Lab (where he does research on engine performance and emissions, combustion science, and energy conversion), breaking those bonds will always take more energy than you get back.

Let’s say you wanted to build this car. It would need equipment to split a water molecule apart and separate its oxygen and hydrogen. Then it would need to isolate each of them in separate tanks. Then you would need a combustion system that could mix and ignite them, or a fuel cell that could recombine them to make electricity. The released energy could then drive a piston or run a motor and move the car.

Here’s the problem, Cheng says: “A water molecule is very stable.” The energy needed to separate the atoms is greater than what you get back — this process actually soaks up energy instead of giving it out.

Plus there’s a more volatile problem: hydrogen is dangerously flammable. Without the right safety measures, a fender-bender could turn into an explosion worthy of an Avengers movie.

Thanks to Tiffanie Clarke, 14, from Orlando, Florida, for the question.