Home>> Connect>> Ask an Engineer>> Transportation>> Would it be feasible to dump nuclear waste on the Moon? 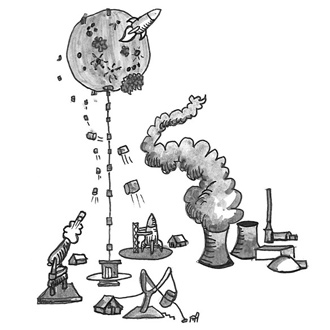 Would it be feasible to dump nuclear waste on the Moon?

According to Jim Clark, a graduate student in aeronautics and astronautics and an avid model rocketeer: “There are more cost-effective ways to deal with nuclear waste.” Indeed, by Clark’s calculations, the cost of transporting nuclear waste to the Moon would be high: about $8.5 million per ton. And then there’s the risk factor. “If a rocket carrying 50 tons of nuclear waste has an accident, the entire globe could be affected,” he adds (along with someone’s $425 million).

And besides all that, Clark says, humanity has other plans for the Moon. Several entities, including the European Space Agency, China, Russia, and NASA, have or are developing plans and technology for exploring and possibly colonizing the Moon in the future.

Nuclear accidents in space have happened before. The Soviet Union sent 33 nuclear-powered satellites into space during the Cold War, three of which crashed back to Earth, scattering radioactive debris across the Pacific Ocean and Canada, says Clark. The U.S. launched one in 1965, and while it successfully boosted itself into a disposal orbit, where it will remain for more than 4,000 years, it has been shedding fragments — of what, we’re not sure — for the last few decades.

If you really want to rid the planet of nuclear waste, don’t aim for the Moon, Clark advises. “For the same amount of rocket fuel — or the equivalent amount of energy from more exotic launch techniques, like space elevators or space guns — you could send the waste on a trajectory which simply leads into deep space, where it would drift and decay forever,” he says.

Thanks to Terry Mulcahy, 58, from Waco, Texas, for the question.