Home>> Connect>> Ask an Engineer>> Design>> Is it possible to make a Batman suit? 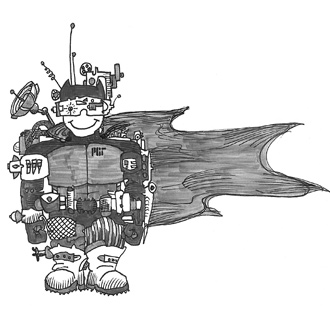 Is it possible to make a Batman suit?

You betcha — and we can make it better.

The characteristics of Batman’s suit are strikingly realistic, according to Robert T-I. Shin, the Head of the Intelligence, Surveillance, and Reconnaissance and Tactical Systems Division at MIT Lincoln Laboratory. “The Batsuit is not so far out there. All the functions are very possible,” he says. “But there is some work going on at MIT that I think Batman hasn’t capitalized on yet. Our technologies could make Batman a better-equipped superhero.”

“In general, we’re all over the technologies required by the Batsuit,” says Shin, who also directs Beaver Works, a collaboration between Lincoln Laboratory engineers and MIT School of Engineering students and faculty. What about night vision? “We have had that technology for a long time,” Shin says. Fire resistance? “Yes, that’s not hard.” Communication? “Not a problem.” He is ticking off the necessary items. “Yeah, they’re almost all doable, yep, yep, yep.”

“Now let’s talk about making the suit better,” says Shin, starting with Batman’s cape. People use sailcloth wings to fly all the time. “You don’t even need a full cape to fly. It’s basic stuff,” he says. For what could lie in store, Shin points to the research of Professor Yoel Fink, director of MIT’s Research Laboratory of Electronics and CEO of the Advanced Functional Fabrics of America. Fink’s research is on the development of new fibers and fabrics that will have the ability to see, hear, and sense their surroundings; communicate; store and convert energy; control temperature; and change color. “We could make Batman a cape that changes color, or that acts like an invisibility cape by projecting what is behind him and matches to the scene like a chameleon. With our technologies, Batman will have an even more capable cape.”

Batman’s inexact weapons are another area that could use some improvement, according to Shin. “Maybe he could use a smarter projectile. So he can throw it out, and it’s programmed to recognize a person. It won’t harm other people — it will only chase that particular target.”

The Dark Knight’s super strength could use work too, says Shin. Spiderman has superhuman characteristics while Batman only appears to be very athletic, he observes. “I can see future Batsuits with a small power module as a nuclear power source. The suit itself could actually augment him to gain more super strength,” he says. A virtual assistant for extra support is also a possibility, he says.

There may be some trade-offs though. The new Batsuit might not be as sleek and stylish as its Hollywood versions. Modern special police and military don’t “wear pantsuit-like things like Batman,” says Shin. “We’re not quite there in terms of making the suit really thin and fit to the body while also having all the technology. We must decide between agility and the extra strength and speed. Protection versus functionality,” says Shin, with a thoughtful pause. “If we include all these technologies in the Batsuit, it’ll be quite tough for him to move around. We have to make decisions that leave Batman at his best.”

Thanks to Lewis, 13, from Wakefield, for the question.