Home>> Connect>> Ask an Engineer>> Manufacturing>> How do you make and install a lightning rod? 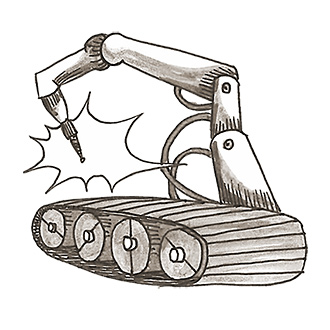 How do you make and install a lightning rod?

Ben Franklin’s kite-and-key experiment sparked an interest in understanding lightning — and protecting people and buildings from its shocking consequences. Lighting is nature’s way of a correcting an imbalance. Certain weather conditions lead to the buildup of negative charge in the atmosphere and a positive charge on the ground. As those charges grow, they begin to look for a pathway toward each other. When electricity travels that path — in extremely large doses — it’s lightning. Lighting always travels the shortest path it can find, which is why buildings, trees, and other tall objects are its usual contact points. That’s also why we try to protect these things with lightning rods.

Lightning rods provide the atmosphere’s negative charge with a low-resistance path to the positive ions in the ground, says Karl K. Berggren, an associate professor of electrical engineering in MIT’s Department of Electrical Engineering and Computer Science. By directing the electricity safely away from the building, tree, or tower they’re attached to, a lightning rod mitigates the damage likely to happen when millions of volts of electricity pass between the earth and the atmosphere.

The shape, material, and design of a lighting rod matters, Berggren explains. “In the world of lightning rod technology, sharp is better,” he says. Those negatively charged ions want the smoothest possible path to positive ions, so commercial lightning protection technology features pointy rods or radiating metal fingers. As the electrical current begins to flow through the lightning rod, it must be conducted away from the structure on which the rod is installed, usually through a cable terminating in a metal rod sunk into the ground to safely dissipate the electrical charge. “You want a thick, highly conductive metal, like copper, to carry the current so it doesn’t arc to other materials and cause an explosion or fire,” Berggren explains.

The stakes in getting any of these features even slightly wrong are too high for the average homeowner to think about doing this on his or her own, Berggren says. “The concept behind lightning protection is simple, but the requirements for safe installation of a lightning rod are specific and require expertise,” he says. “Work with an electrician. This is a life and death project, not a hobby.”

Thanks to Daniel Rodríguez from Maia, Portugal, for this question.