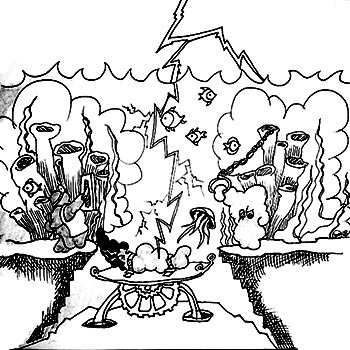 How did life on Earth begin?

It started in the depths of the ocean. Or maybe underneath the ice caps…

The truth is, we don’t know for certain where and how the first living thing on Earth came to be. However, many scientists and engineers think that life may have started in protected places on Earth, like the bottom of the ocean. This way, early life would avoid dangers on the surface of the planet like radiation from the sun, explains David Miller, the Jerome Hunsaker Professor of Aeronautics and Astronautics at MIT.

With high pressure and absolutely no sunlight, the bottom of the ocean might seem like an unlikely environment for life to begin, but the discovery of hydrothermal vents on the ocean floor suggests otherwise. That’s because, Miller says, these vents provided a source of heat, liquid water, minerals, and chemicals—all the right ingredients for creating life. When these components combined, a chemical reaction occurred that sparked an energy that may have created the molecules of early life. This theory is still unproven, Miller notes, yet it is widely upheld because of other discoveries of possible life existing in the ocean worlds of space.

Miller knows a thing or two about the oceans of space because he studies telescopes, like the Hubble and the James Webb. Having come to MIT 40 years ago as a freshman, he went on to serve on the U.S. Air Force Scientific Advisory Board and then as NASA’s Chief Technologist. These days he’s teaching aerospace dynamics and helping students with their capstone projects—about a third of which make it to space on either the International Space Station or on NASA missions.

“Science is figuring out what is, and engineering is creating what isn’t,” reasons Miller. It’s difficult to say what is (or rather, what was) when it comes to 4 billion years ago, but Miller explains that “a cohesive collaboration between science and engineering” is helping us to know more. For example, we now know that the early Earth conditions thought to have existed around hydrothermal vent systems also exist throughout the solar system. Learning about possible life elsewhere in the universe, might help us unlock the secrets of how life started here on Earth.

Cassini, a probe built by NASA’s Jet Propulsion Laboratory (JPL), traveled to Saturn’s moon, Enceladus, and found water spewing out like a geyser from a subsurface ocean. Incredibly, organic compounds were found in the plumes of these jets of water. This might not be life, per se, but it is a promising sign that the building blocks of life are all in place. In addition, Miller says, recent research shows evidence of hydrates from hydrothermal vents on Enceladus’s ocean floor that could provide heat, much like those hydrothermal vents in Earth’s ocean. Similarly, NASA’s Galileo mission discovered plumes erupting from the surface of Jupiter’s moon, Europa. Miller hopes to learn more about these plumes when another NASA mission, Europa Clipper, is launched sometime in the 2020s.

As recent as this past July, Italian scientists working on the Mars Express mission for the European Space Agency, found a large lake beneath an ice cap on Mars. In the past, NASA’s Curiosity rover found organic molecules in ancient rock—an encouraging sign of past and possibly current life on the Red Planet. Miller says that out of all the planets, Mars is the most like Earth because it has an atmosphere and evidence of methane (which could be a byproduct of life). Now evidence of this lake is even more exciting as it implies that life could very well be present.

Anywhere you look on Earth, it’s likely you’ll see life in a variety of its amazing forms. Just over 4.5 billion years ago (a short time in the grand scheme of the universe), the Earth as we know it was nothing more than some vaporous gases and grains of dust and sand. Since then, our planet has endured one cataclysm after another—ice ages, cosmic collisions, poisonous gas attacks. And yet, life still took hold. Maybe one day we’ll understand the phenomenon of life’s beginnings. Certainly we are getting closer by studying the great oceans of not only our planet, but also others. One thing that is certain: Life here on Earth, and elsewhere if it exists, is resilient.