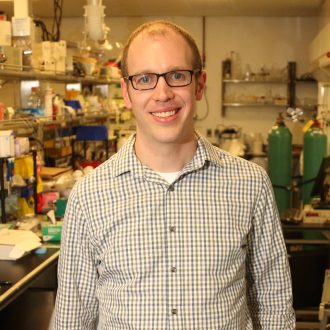 Zachary P. Smith will join the Department of Chemical Engineering as an assistant professor in January, 2017. Smith earned his bachelor’s degree in chemical engineering from Pennsylvania State’s Schreyer Honors College, and completed his PhD in chemical engineering at the University of Texas at Austin, where he worked under the guidance of Benny Freeman and Don Paul. While at UT Austin, Smith developed structure/property relationships for gas diffusion and sorption in polymer membranes. His postdoctoral training with Jeffrey Long at the UC Berkeley examined the design of coordination solid (i.e. metal-organic frameworks) for selective adsorption based separations. His research focuses on the molecular-level design, synthesis, and characterization of polymers and inorganic materials for applications in membrane and adsorption-based separations. These efforts are promising for gas-phase separations critical to the energy industry and to the environment, such as the purification of olefins and the capture of CO2 from flue stacks at coal-fired power plants. Smith has co-authored over 20 peer-reviewed papers and been recognized with several awards, including the DoE Office of Science Graduate Fellowship. He was also selected as a U.S. delegate to the Lindau Nobel Laureate meeting on Chemistry in 2013.