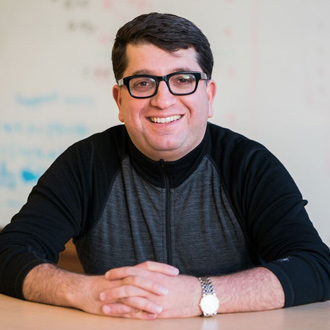 Ali Jadbabaie joined the MIT faculty as a full professor with dual appointments in the Department of Civil and Environmental Engineering and the Institute for Data, Systems, and Society in July 2016. He is currently the JR East Professor of Engineering, the director of the Sociotechnical Systems Research Center, and the associate director of the Institute for Data, Systems, and Society at MIT. He is also a principal investigator in the Laboratory for Information and Decision Systems. Jadbabaie received his BS from Sharif University of Technology in Tehran, Iran, his MS in electrical and computer engineering from the University of New Mexico, and his PhD in control and dynamical systems from Caltech. After a year as a postdoc at Yale University, he joined the faculty at University of Pennsylvania in July 2002. At Penn he was named an associate professor with tenure in 2008, a full professor in 2011, and the Alfred Fitler Moore Professor of Network Science in 2013. He also held appointments in computer and information science and operations as well as information and decisions in the Wharton School of Business. Jadbabaie is the inaugural editor-in-chief of IEEE Transactions on Network Science and Engineering, an interdisciplinary journal sponsored by several IEEE societies. He is a recipient of a National Science Foundation Career Award, an Office of Naval Research Young Investigator Award. In 2015, he received the Vannevar Bush Fellowship (formerly known as National Security Science and an Engineering Faculty Fellowship) from the office of Secretary of Defense. Jadbabaie’s students have won and been finalists of numerous best paper awards at various ACC and CDC conferences. He is also an IEEE fellow. He has made foundational contributions to the field of collective autonomy and opinion dynamics, and his current research interests include the interplay of dynamic systems and networks with specific emphasis on multi-agent coordination and control, distributed optimization, network science, and network economics.