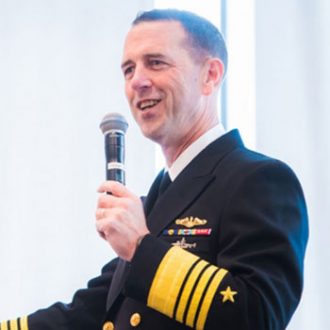 Looking back on his MIT graduate student days in the late 1980s, Admiral John M. Richardson SM ’89, EE ’89, ENG ’89 recalls a quieter time. He was not yet helming the world’s most powerful navy, nor was global competition at sea nearly so high.

Richardson is now the chief of naval operations (CNO), the senior four-star admiral leading the U.S. Navy. This position places him on the Joint Chiefs of Staff as adviser to the secretary of defense and the president. He draws on his deep ties to academe to help the Navy keep pace.

From his graduate student days to today, what has remained unchanged is the depth of his attachment to MIT and the warmth and respect between Richardson and his mentors in the MIT-Woods Hole Oceanographic Institution Joint Program.

“As a graduate student, John clearly stood out as brilliant, a leader, and wonderfully warm and friendly,” says Alan Oppenheim, an MIT Ford Professor of Engineering.

After his time at MIT and Woods Hole, Richardson went on to command the submarine USS Honolulu, a ship known in the Navy for the important missions for which it was tasked. Before that command he was posted at the White House as President Clinton’s Navy adviser. Prior to being selected as the CNO, he was in charge of all of the nuclear reactor technology in the Navy.

“It is so striking that through his ascendancy in the Navy, John never lost these professional and personal qualities. He is as approachable today as he was back then,” Oppenheim says.

The power of relationships

Richardson recently took time from his schedule to articulate the significance of MIT in his life and career. He says friendships that began during graduate work quickly expanded to bluefish barbeques, bike riding, wind surfing, listening to jazz and country music together, and many other things that “we still share even 30 years later.”

He speaks with affection of strong relationships with academics such as Oppenheim and Arthur Baggeroer, an MIT professor of mechanical, ocean, and electrical engineering and a Ford Professor of Engineering, Emeritus. “What I value most about my time at MIT are the enduring relationships with amazing people. Al, Art, and so many others have enriched my life so much — they are my mentors, my senseis.”

Richardson insists other alumni have made what he describes as “far more important contributions to the field of engineering.” And says for his part, he’s been able to apply his time at MIT to leading the Navy.

“In the end, it’s all about making our sailors the best in the world,” Richardson says. “The Navy that I'm so privileged to lead has always used world-leading technology, brought to life by our partnership with academe. MIT has always been a bright star in that constellation of innovation and excellence.”

Richardson recalls a fall 2017 symposium about the future of signal processing in honor of Oppenheim, a pioneer in the field. “I'll never forget the warm feelings of camaraderie that defined Al’s conference on the future of signal processing and 80th birthday celebration.” He describes himself as “super nervous” after accepting the invitation to speak because he knew “the world’s best would be there to listen.”

“All of that anxiety was instantly dispelled by the love and respect Al engenders in others, and that will always be part of his legacy. We all felt like family by our association with him and MIT,” Richardson says.

At the symposium, the admiral outlined the challenges ahead for the Navy and invited solutions. “I want to share with you my problems to provide a template for those of you all with solutions,” he said, standing in full dress uniform. “This is a continuation of a great tradition that we have between the Navy and MIT.”

The Navy faced a submarine problem in the Atlantic during World War II that MIT helped solve through a rigorous application of emerging science in operations research, he said. “Academe came to our rescue there.”

The same was true for the Battle of Britain, during which MIT-developed naval anti-aircraft technology played a pivotal role in beating back large-scale attacks by Nazi Germany. “We have a long tradition of working together.”

Among other things, MIT has a long-standing Graduate Program in Naval Construction and Marine Engineering in close cooperation with the Navy dating back to 1901. The program prepares members of the U.S. Navy, U.S. Coast Guard, foreign naval officers, and other graduate students for careers in ship design and shipbuilding.

Challenges in the maritime

Ocean traffic has increased by a factor of four over the past 25 years, Richardson said to a packed room during the conference on the future of signal processing. “Just picture that curve in your mind. The amount of food we get from the sea has increased by more than a factor of 10 in the same time period.”

“The Arctic ice cap is the smallest it has been since we started taking measurements and getting smaller, and that has tremendous implications for traffic routes and access to resources,” he said.

The Internet of Things will include 30 billion connected devices by 2020. And 99 percent of web data rides on undersea cables on the sea floor. “It’s not about a cloud, it’s about the ocean,” said Richardson. “If cables are disturbed or disrupted, you can’t reconstitute that via satellites or anything else; you can only fight back and get about two percent.”

“Things are moving very quickly. It’s very competitive. We’ve done a lot of work to try and figure out — how should the Navy respond?” he said. Multiple analyses show a need for heightened naval capability. Yet even the most aggressive shipbuilding plan equates to constructing 350 ships in about 17 years.

In his presentation, Richardson pointed to a chart with icons representing the U.S. fleet: ships, satellites, submarines, and aircraft. Let’s redefine the axis, he said. The measure of naval capability no longer rests only on the numerical metric of physical things but also on the ability to network platforms and to manage information.

“Signal processing has a terrific and important role in helping us transcend just making more ships. We must make our ships – and our Navy – more capable as well,” said Richardson. He pointed to a new graph in which U.S. naval power rises beyond exponential curves as the fleet is deeply networked with the assistance of technologies such as artificial intelligence, human and machine teams, and quantum computing.

“I have known every chief of naval operations over the last two decades, and John is by far the most engaged with academia,” says Baggeroer, who was the director of the MIT-WHOI Joint Program when Richardson enrolled in 1985. He also acted as academic advisor to Richardson and five additional naval officers in the program.

Over the years, Baggeroer kept up with Richardson as he rose through the ranks.

“He has been very supportive of the MIT-WHOI Joint Program and has taken steps to attract to the program younger officers with the same qualifications he had at the time,” adds Baggeroer.

“I’m so grateful for the continued friendship, partnership and leadership of MIT with the Navy,” says Richardson. “MIT has had an amazing impact on me and my life. It literally changed the way I think about things.”