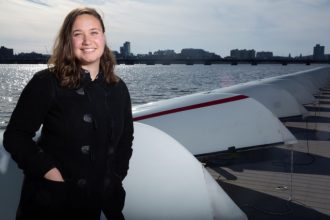 The impact of climate change on the ocean

When deciding on a major, one thing was clear for Michelle Kornberg — she didn’t want to be stuck inside for four years. “I like the environment of working on something in the lab, but I grew up in a very outdoorsy family,” she says. “I definitely knew I didn’t want to be inside all the time.”

During MIT’s First-Year Pre-Orientation Program, Kornberg got a sense of which major would help her achieve this goal. One of her orientation counselors presented on their summer aboard the research vessel Nautilus Explorer. The counselor was studying Course 2-OE (Mechanical and Ocean Engineering). Later that year, Kornberg declared 2-OE.

“I think ocean engineering as a field is really interesting because it marries the holistic side of living on planet Earth with solving all the technical challenges mechanical engineers face,” explains Kornberg, now a senior.

This balance of using fundamental theories in areas like fluid dynamics, controls, and acoustics to solve problems in underwater environments has been a driving force throughout her academic career.

“I am interested in how we can apply specific ocean engineering solutions to larger global problems, particularly climate change,” Kornberg adds.

Throughout her time in Course 2-OE, Kornberg has tackled problems stemming from climate change through an ocean engineer’s lens in a number of ocean environments, including Boston Harbor and the Great Barrier Reef.

By the middle of her first year, Kornberg started working with the MIT Sea Grant College Program as an undergraduate researcher working alongside Thomas Consi, research education specialist. In addition to building a model tugboat through her work with Consi, Kornberg worked on a project to track ocean acidification in Boston Harbor.

“Being able to track different elements of the coastal ocean environment is important to understanding the chain of events that leads to things like coastal ocean acidification,” she says.

In addition to mapping the topography of the ocean floor — known as bathymetry — the team measured variables such as water current speed. Their goal was to identify the best place to situate a measurement station that could track coastal ocean acidification in Boston Harbor.

Kornberg would have more opportunities to work on one of Boston’s waterways throughout her 2-OE classes. In the capstone classes 2.013/2.014 (Engineering Systems Design and Development) during her junior year, she worked with a team on designing and building a working prototype of an autonomous vehicle.

“The class was the first time I had the experience of working on a team with people with very different backgrounds,” Kornberg adds. “It was such a good experience — you had some people who focused on electronics and others who had a background in materials science.”

The student team built a prototype for an MIT Lincoln Laboratory project called the Ionobot. An autonomous surface vessel, the Ionobot measures changes in the ionosphere to help identify and prevent interference with GPS signals.

On the day of the final project presentation, Kornberg and her team assembled on the docks of the MIT Sailing Pavilion, nervously awaiting the moment of truth. Would their prototype work as they planned?

An angry storm offered the team one additional challenge — windy conditions made for a choppy day on the Charles River. The team launched the Ionobot prototype and took a sigh of relief. It performed as they expected.

“It was objectively the worst weather day that semester, but it was still somehow the greatest day,” recalls Kornberg.

Several weeks later, Kornberg would be working in very different conditions along the northeast coast of Australia.

Last summer, Kornberg worked at the Australian Institute of Marine Science (AIMS) in Townsville, Australia through the MIT International Science and Technology Initiatives. Alongside Nicholas Fritzinger-Pittman, a senior studying mechanical engineering, Kornberg worked on developing a rail system that would enable a hyperspectral scanner to collect accurate data on thousands of coral samples in the AIMS Sea Simulator.

“In a regular camera, each pixel has a specific color. A hyperspectral camera, on the other hand, assigns a frequency distribution to each pixel, allowing you to track more than just physical light,” explains Kornberg.

This technology is particularly useful in predicting whether or not a coral is experiencing the early stages of bleaching — a condition often caused by climate change that has destroyed of large swaths of coral reefs globally.

“Coral depend on algae to stay alive. The algae can tell when conditions are suboptimal for photosynthesis before the coral can so they ‘get out of Dodge’ and leave the coral. This is the first sign of coral bleaching,” Kornberg adds.

Since researchers are unable to see algae leave the coral using the visual spectrum, they rely on a linear hyperspectral scanner to capture this process.

Before Kornberg and Fritzinger-Pittman arrived at AIMS, coral samples would have to be transported from one tank to the tank with the hyperspectral scanner on it. Since removing the coral from their environment could compromise the experiment, Kornberg and Fritzinger-Pittman worked with researchers at AIMS to develop a portable rail system that would bring the hyperspectral scanner to the coral — not the other way around.

As part of their time at AIMS, Kornberg and Fritzinger-Pittman joined a research cruise on the RV Cape Ferguson. Over the course of six days, the team visited Keeper Reef and John Brewer Reef. During breaks in research, they were able to snorkel explore the reef.

“Snorkeling along the reef was just an incredibly humbling and magical experience,” says Kornberg.

Later in the summer, the pair also took a scuba diving trip to Cairns, Australia. While they got to see colorful reefs and animals like clownfish, giant clams, and sea turtles, they also saw the effects of coral bleaching on some parts of the reef off the coast of Cairns.

“Seeing some coral bleaching in the reef itself was a really sad, sobering sight,” she adds.

As Kornberg prepares for life after graduation this May, she is shifting her focus to renewable energy.

“I personally am most interested in looking at how we can build platforms that harness energy from the ocean environment,” she says.

Kornberg plans to work for several months this fall at Seaplace in Madrid, Spain. Her focus will be on designing and building marine turbines for wave energy conversion.

“Waves offer so much potential in terms of renewable energy. We’ve known this for a long time, but haven’t been able to figure out how to best harness this energy,” she explains. “I’m really interested in working on technologies that can help us utilize wave energy at scale.”