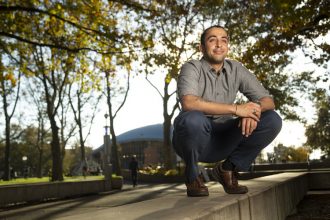 Sustainable solutions at home and abroad

Mechanical engineering student Arnav Patel is on a mission to promote sustainability — from Cambridge to the Himalaya.

Arnav Patel is a self-described sustainability enthusiast. Working on solutions related to climate change has been a central thread woven throughout his time at MIT. As a first-year student, he was initially drawn to mechanical engineering because he wanted to keep his options open.

“I felt like mechanical engineering is that perfect niche where there’s so much exposure to so many different fields. It has taught me more than just how to build things, it has changed how I think. It was honestly the best decision I ever made,” says Patel, now a senior studying mechanical engineering.

Class 2.00C (Design for Complex Environmental Issues), which is offered through the departments of Mechanical Engineering, Civil and Environmental Engineering, and MIT D-Lab, was the first class to expose him to how engineers are developing solutions to promote sustainability. Part of the Terrascope program for first-year students, the class focused on the theme “climate resiliency” the year Patel took it. Patel and his classmates traveled to the Netherlands for the class to see the infrastructure that has been built to mitigate damage from climate change-related flooding.

The class and trip were a turning point for Patel.

“From then on, I have approached sustainability in pretty much every direction I could at MIT,” he says.

The summer after his sophomore year, Patel became a founding member of a group called MIT Divest. The student-led group advocates for MIT to divest or remove investments in any companies that “develop fossil fuel resources beyond the 2 degrees Celsius carbon emissions limit, spread climate disinformation, and engage in anti-climate lobbying.”

The group also asks that any money divested from the fossil fuel industry be reinvested into carbon-free energy enterprises. For Patel, who is now co-chair of MIT Divest along with physics major Jessica Cohen, the group was his first foray into activism.

“Our work at MIT Divest is really exploring the climate activism side of things,” says Patel. “As a young person, I don’t have a lot of power on a government scale besides how I vote, but with MIT Divest I felt empowered to fight for change within the MIT community.”

Since launching, the group engaged in a number of activities to encourage fellow students and faculty to consider divestiture, including surveys, articles in MIT’s student newspaper The Tech, and meetings with members of MIT’s administration.

While MIT Divest has afforded Patel the opportunity to explore climate activism, his academic work has helped him develop sustainable solutions both on MIT’s campus and places further afield, like the Himalaya.

As with most seniors this year, the fall 2020 semester looked different than Patel had envisioned. He was able to live on campus with his classmates, following various Covid-19 protocols put in place to keep the campus community safe.

In class 2.S885 (Exploring Sustainability at Different Scales), Patel and his classmate Sheila Kennedy-Moore examined how to make on-campus dining during the pandemic more sustainable. For their final project in the class, Patel and Kennedy-Moore compared the energy use and carbon emissions associated with a variety of disposable utensils, containers, and cups.

They did a quantitative analysis of the materials used in the disposables provided to students eating in their dorm rooms by MIT Dining and made recommendations based on which materials had the smallest carbon footprint.

The pair also examined the effectiveness of the Reusable Utensil Pilot, launched by the Student Sustainability Coalition during the fall semester. They took into account the energy used to wash reusable utensils in warm water after each use.

“What we found was that shifting from fully disposable utensils to reusable utensils could halve carbon emissions for the utensils during the semester,” says Patel.

Sustainable Homes in the Himalaya

For his senior thesis, Patel is working with a team at MIT D-Lab in collaboration with Institute of Chemical Technology (ICT)-Mumbai and University of Petroleum and Energy Studies (UPES) on developing home energy solutions for communities in the Himalayan region. During the cold winter months, many Himalayan communities rely on inefficient and ineffective home heating methods. Some of these methods, in addition to open fires used to cook meals, are hazardous to people’s health.

“People often walk long distances to collect wood, suffer from fine particulate pollution from indoor fires and heating and cooking devices, and lack the ability to adequately provide heat during cold months and cook safely throughout the year,” says Patel.

The research team has conducted surveys to better understand the difficulties these communities face. Patel will conduct an analysis of this data and analyze user needs and preferences. His analysis will help to guide the team on which solutions may be suitable for problems associated with household energy in the region.

“Arnav has used his engineering intuition and user research skills that he learned in D-Lab courses to design and analyze a household needs assessment for our project on Livable Himalayan Homes,” says Daniel Sweeney, a research scientist at MIT D-Lab. “This project will result in affordable home energy solutions that meet the unique needs of these families and can be scaled across communities in the Himalayan region.”

According to Sweeney, Patel has become an integral part of MIT D-Lab over the years. “Arnav has a unique mix of MIT-nerdiness along with great care, dedication, and respect for the many collaborators he has worked with around the world. He has been a valuable member of the D-Lab family,” Sweeney adds.

In addition to working on his thesis, this semester Patel is participating in an MIT Experiential Learning Opportunity (ELO) with Beth Israel Deaconess Medical Center to help assess how their real estate decisions affect their carbon emissions.

After graduation in June, Patel will join management consulting firm Bain and Company as an associate consultant. While the move to management consulting may seem like a divergence from his passion for sustainability, Patel sees an opportunity to approach problems associated with climate change from a different angle.

“I landed in the management consulting realm because I wanted to understand the business world a little bit better,” he says. “That’s another area where I feel like I could play my part in pushing sustainability.”