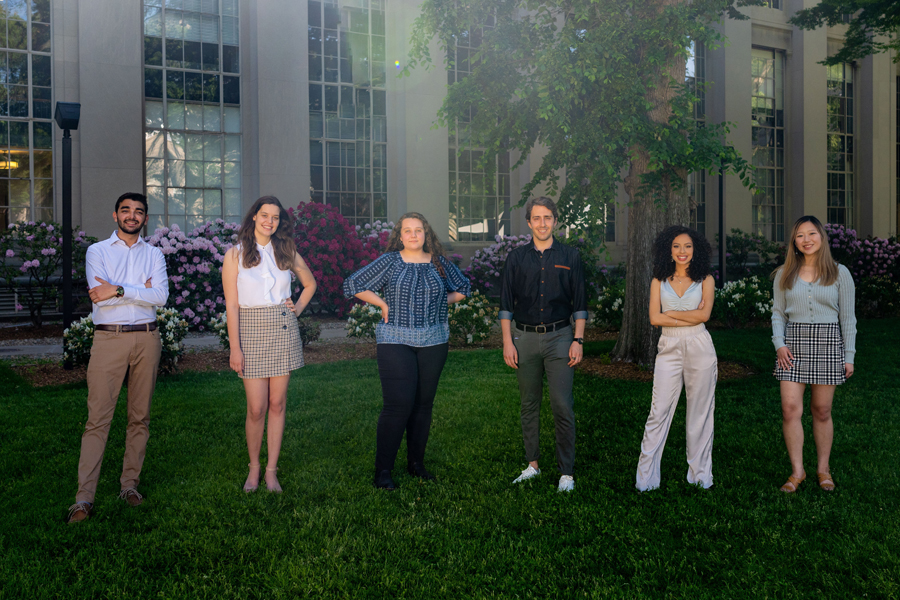 Hovering one hundred meters above a densely populated urban residential area, the drone takes a quiet breath. Its goal is singular, to systematically measure air quality across the metropolitan landscape, providing regular updates to a central communication module where it docks after its patrol, awaiting a new set of instructions. The central module integrates each new data point provided by a small drone fleet, processing them against wind and traffic patterns and historical pollution hotspot information. Then the fleet is assigned new sampling waypoints and relaunched.

“We all converged on this, because we felt that the social impact would be more powerful than any of the other projects we were looking at,” says Trautman, who majored in electrical engineering and computer science.

Their system represents a fundamentally different approach to air quality monitoring compared with the stationary systems routinely used in urban areas, which the group says often fail to detect spatial heterogeneity in pollution levels across a landscape. Given their limited distribution and lack of mobility, these systems are really only a reliable indicator of the air quality directly surrounding each monitoring point, but their data is reported as though it were representative of air quality across the entire city, say the recent graduates.

“So even though they might say that your air quality is somewhat good, that may not be the case for the park right next to your home,” says Gonzalez-Diaz.

The NEET cohort’s drone system is designed to provide real time air quality data with a 15-meter resolution that is publicly accessible through a user-friendly interface.

The NEET program was launched in 2017 in an effort to fundamentally reconceptualize the way that engineering is taught at MIT. It emphasizes interdisciplinary scholarship, cross-departmental community and project-based learning to prepare students to engage the major engineering challenges of the twenty-first century. The program is actively growing and is the fourth largest undergraduate academic community, with more than 186 students participating. Twenty-three majors from thirteen departments are represented. Sixty-four percent of the students are women and twenty-eight percent are members of underrepresented groups. This year over 39% of the first-years who applied to this program heard about it from current NEET students.

Nelson-Arzuaga, Choi, Gonzalez-Diaz, Trautman, Rebei, and Saat graduated from MIT with a certificate from NEET’s Autonomous Machines “Thread.” The NEET program has five threads - areas of concentration - that students can choose from, each emphasizing a class of contemporary or futuristic engineering problems. For example, the Advanced Materials Thread explores the future of materials technologies and manufacturing, while the Digital Cities Thread integrates computer science with urban planning to prepare students to build more idealized cities. NEET also offers a biotechnology focused Living Machines Thread as well as the Renewable Energy Machines Thread, which emphasizes green energy systems design. The Autonomous Machines Thread teaches students to design, build, and program autonomous robots. “A common feature across all five threads, is that NEET students want to create an impact while they are still students, by doing projects that tackle critical societal problems,” says NEET executive director, Babi Mitra.

The NEET curriculum’s structure is progressive, building on the previous year’s lessons to ultimately prepare the students for real world application.

“[Sophomore year] we give them an individual project….and then during junior year, they have their first small group project. And then the senior year, they have a class project. So it progressively gets more complicated,” says NEET Lead Instructor, Greg Long. “This senior project is supposed to mimic something they would do if they were going to do a startup company.”

It was during the cohort’s junior year, when they were tasked with building autonomous vehicles that could race other vehicles and avoid obstacles, that the pandemic forced the closure of MIT’s campus and the NEET cohort was scattered across the globe.

“[The curriculum] is so hands on and such a huge time commitment that we really thought the classes would end at that point when we had to leave campus,” says Saat. “But then they kept going. They set up the simulation for us and everything, but the time commitment was still there and we were in five different time zones.”

The NEET program demands roughly 20 hours per week on top of the rest of the students’ course load and the students say that meeting this demand with Choi in Cambridge, Trautman and Nelson-Arzuaga  in California, Saat in Turkey, Rebei  in Illinois, Gonzalez-Diaz in Puerto Rico, and another teammate in Taiwan, required creative and exhausting schedule coordination.

“Literally [for] some of us the sun was rising and [for] the others the sun was going down [while working together],” says Choi. “We've definitely bonded and learned so much, and I think it would not have been possible if even one of us was not very interested in robotics.”

A unique feature of the NEET Autonomous Machines thread is that they take a senior fall seminar class during which they discuss and decide the senior spring project they want to work on. It was the pandemic that helped inform the group’s specific choice to tackle air pollution as a final project their senior year, because it further exposed “the racial and economic disparities that air pollution causes in the United States,” says Rebei.

The cohort’s drone project is designed to monitor a form of pollution called PM 2.5, which are essentially pollution particles small enough to enter the blood stream when inhaled, potentially resulting in lung and heart disease over time, according to the students.

“Low income communities of color, at the end of the day, are the ones who are disproportionately impacted by air pollution and … air pollution is what contributes to a lot of these deadly respiratory illnesses … in these particular communities,” says Rebei “People who already have these pre-existing conditions… are at higher risk of getting very sick from Covid-19.”

In addition to designing a drone system capable of effectively capturing neighborhood level variation in pollution exposure levels, the NEET cohort created a web interface that could layer this information with area socioeconomic data, such as income, race, household composition, disability status, housing types, and modes of transportation. This would make patterns and disparities in air pollution exposure public and easier to prove, something the students say could help affected communities advocate for change.

The complexity of the drone project, remote learning notwithstanding, required the entire cohort to step out of their comfort zone and learn new skills quickly.

“I’m a mechanical design student, so I do a lot of 3D modeling,” says Nelson-Arzuaga. However, for the drone project she was in charge of learning how to operate a cellular communications network so that the drones would be able to talk to the central communication module. “[It was] very different from anything that I learned in all of my other design classes.”

The recent graduates say that NEET prepared them to engage these challenges, but expressed that the most valuable part of the program for them was the community that they built and the experiences they shared working together.

“When we took the sophomore robot class, we were all like, ‘What is a robot? How do we do anything?’” jokes Trautman. “[And now we’re] doing very high-quality development work on this project. I think it’s been exciting to see, to see where everyone is going in the future and just seeing how everyone’s progressed. It’s been a really cool journey.”

The NEET program is continuing to develop and fine tune its curriculum, learning environment and community, and student engagement is an integral part of that process. If you would like more information, please visit: https://neet.mit.edu/