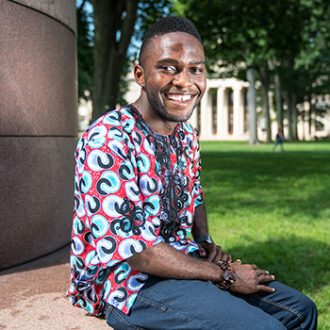 No Bounds to How Much We Can Think

As a native of Cameroon and president of the MIT African Students Association, Pelkins Ajanoh has ambitions for himself—and his home continent.

Video and Photo by Lillie Paquette; Written by Carolyn Blais

MIT senior and native of Cameroon, Pelkins Ajanoh, believes “in the future where [his] great grandkids are going to be surprised that there was a day when Africa was known to be a poor continent.” As president of the MIT African Students Association, Ajanoh teaches the MIT community about the culture and history of Africa and shares his hope for a brighter future for his home continent.

Cambridge, Massachusetts may be a long way from the coastal city of Limbe, Cameroon, where Ajanoh grew up, but the distance didn’t deter Ajanoh from coming to MIT. Having lost his father at age thirteen, Ajanoh’s older brother stepped into the role of father-figure and encouraged him to take the SAT and to consider pursuing a degree at MIT. Flash forward a few years and Ajanoh is now studying robotics and will graduate this June with a mechanical engineering degree and a proud brother and family to boot.

Ajanoh says he is interested in engineering, but he is also “interested in people and how they think and how they make decisions.” How humans use their senses to understand the world is specifically of interest to Ajanoh and his work in robotics and autonomous vehicles. “For a robot you need to be able to incorporate all the sensory techniques and plan ahead of time.” Through an Undergraduate Research Opportunity or UROP at the Media Lab, Ajanoh has been fortunate to experiment in this very area. He refers to the Media Lab as an “amazing place where there are no bounds as to how much we can think.”

Despite being so far away from home, Ajanoh has not forgotten his roots. Through his leadership of the African Students Association, he strives to build a community of Africans on campus. He is also working with the MIT Sandbox Innovation Fund on a project that will help Cameroon farmers plant a crop called cassava on a much larger scale. Ajanoh says he wants to help Africa in both its current and future states.

“The whole point of engineering is solving problems. And the reason we solve problems is because problems get in the way of people living the life which they really want to.”