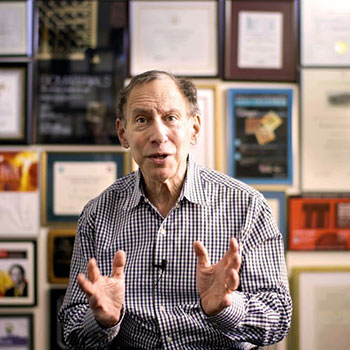 By Melanie Miller Kaufman. Video and photo by Lillie Paquette.

As a child, Institute Professor Robert S. Langer was captivated by the “magic” of the chemical reactions in a toy chemistry set. Decades later, he continues to be enchanted by the potential of chemical engineering. He is the most cited engineer in the world, and shows no signs of slowing down, despite four decades of ground-breaking work in drug delivery and polymer research.

Langer explains, “For me, magic has been discovering and inventing things. Discovering substances that can stop blood vessels from growing in the body, which can ultimately lead to treatments for cancer and blindness.”

The Langer Lab has had close to 1,000 students and postdocs go through its doors. Hundreds are now professors around the world. Many have started companies.

“I’m very proud of all of them,” says Langer. “I hope that I help them a little bit. That’s what we try to do.”