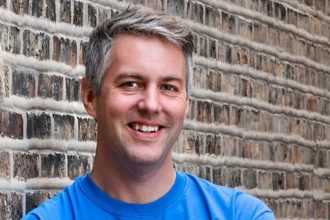 GrubHub Founder Starts a Handy Alternative to the Gig Economy

It started not with a stroke of creative genius, but with a rain barrel that Mike Evans ’99, MEng ’00, wanted to install in his garden. Fourteen calls later, he still hadn’t been able to hire anyone. He started researching the home maintenance sector and discovered that many US trade schools have closed in recent decades, creating a shortage of handypeople. That’s how Fixer was born.

“What it comes down to is there aren’t enough people to do the work,” says Evans, who founded Fixer in 2017. The company hires full-time employees, some of whom don’t have repair and maintenance experience but demonstrate mechanical aptitude. In its training center, they learn the skills to become professional handypeople and eventually teach others. Customers text or email Fixer to schedule a visit or a video consultation (a popular option during the pandemic).

For Evans, the company serves a dual purpose: it provides a service consumers need and it offers training that can launch a career in the trades. “We’re inheriting what trade schools have done historically, and trying to re-create it in a modern context,” he says. Many early employees have continued working at Fixer, he adds, while others have moved into more specialized trades.

Fixer is not Evans’s first foray into entrepreneurship: after he graduated from MIT with degrees in electrical engineering and computer science, a quest to order pizza online led him to cofound the food delivery service GrubHub, which he led from 2002 to 2014. As GrubHub grew—and with it, the gig economy it helped create—Evans realized that even when pursued full time, gig-based jobs are “kind of a dead end” for those seeking long-term career growth. “The gig economy is a bit of my Frankenstein’s monster,” he says, “and Fixer is an answer to that—it’s a very intentional, W-2 employee, career-oriented model.” Evans details his professional evolution in a memoir, Hangry, to be published in 2022.

Fixer is based in Chicago, where it employs close to 50 people who have done around 20,000 jobs so far, from hanging pictures to fixing toilets. The company recently expanded into Dallas and aims to reach two additional cities this year and eventually launch nationwide.

Ultimately, Evans hopes that Fixer can train thousands of new handypeople every year, and that other companies will copy the Fixer model—eventually leading to a broader shift in thinking about employment. “I like the idea of using business as a fulcrum to change society,” he says.

Originally appeared in Slice of MIT, July 21, 2021 and appears in the July/August 2021 issue of MIT News Magazine, published by MIT Technology Review.