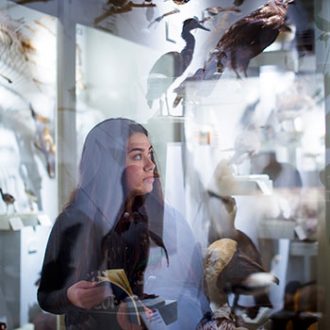 Engineering students explore the boundary between pet and specimen.

On a field trip, Harriet Ritvo and her MIT students went to look at preserved animals on public display, or stored as lab specimens, in collections housed at Harvard University. They encountered hundreds of species, some up close: touching the wings of a pickled bat, the silky fur of a mink, and the sharp claws of a lynx and a lion.

Largely from the MIT School of Engineering, the students were part of a 14-person seminar on history and anthropology known as 21H.380 /21A.411/21H.980 (People and Other Animals). The class explores topics like how ideas about animal intelligence and agency have shifted over time, the human moral obligations to animals, and the limits imposed on the use of animals.

Ritvo, the Arthur J. Conner Professor of History at MIT, and a pioneer in the field of animal-human cultural studies, divides the students’ explorations into units, including the history of hunting, the domestication of livestock, and the exploitation of animal labor.

On this day’s outing, the aim was to “see how dead animals are displayed, and see behind-the-scenes how the displays are produced,” said Ritvo to her class. “We’ll see collections of dead specimens in various forms — stuffed, skins, skeletons.”

Zachary Bierstedt, an MIT senior in the Department of Aeronautics and Astronautics (AeroAstro), took a hands-on approach, jumping at the chance to handle the only mammal capable of sustained flight.

“I am curious largely about what the preservation process actually does to the specimens,” said Bierstedt, as he lifted a bat, labeled Phylbostomus hastatus panamensis (great spear-nosed bat), from its jar. He spread its expansive wings. He ran a finger along the thick hair on its torso. “I was not expecting it to be so furry,” said Bierstedt.

Access to the normally locked doors of labs and inventory within Harvard’s Museum of Comparative Zoology, was facilitated by Mark Omura, a curatorial staff member. He gathered students along a long metal table covered primarily in study skins and detailed the preservation process, explaining the systematic organization of the collection, one of the most extensive in the world.

Moving to a cavernous storage room, he let students examine the additional specimen. Bierstedt lingered by a lion skin to feel its well-preserved claws.

On another stop, MIT senior Alexa Garcia, a biological engineering major, took in the public displays in the Great Mammal Hall, a Victorian-era gallery in the Harvard Museum of Natural History.

“We are learning to think about how people have related to other species over time,” said Garcia. She walked by glass cases holding a full-sized giraffe and camels. Hanging from the rafters were large skeletons of a sperm whale, a fin whale, and a right whale. “I find it very useful,” she added, perhaps all too aware of how new technologies developed at MIT, like gene editing, might alter our definition of natural life.

MIT senior Veronica Padron, an AeroAstro major, stopped cold in front of some exhibits, snapping photographs. She zoomed in on a jellyfish in "Sea Creatures in Glass" — and then cried out as a hippo and a zebra rose into view as part of the Tropical Forest area.

Asked about her experience in the class, Padron said: “In most engineering classes, you are told how things work. You apply principles. This class is more about interpreting meaning. We employ a different style of exploration and discussion. It balances us out.”

The field trip wrapped up in the Glass Flowers Exhibit, a collection of models of more than 800 plant species. Students quickly handed Ritvo their final research papers before heading back to MIT. Watching them go, Ritvo said students in science and engineering benefit greatly from the lessons that humanities and social sciences offer. “Students learn a different way of understanding the world.”

Students say that their reason for taking the course is more than just about knocking out a humanities requirement. “It’s really interesting to think about things from a different perspective,” said senior Matthew Nicolai. “We have to look through various subjectivities — the animal, the human — and contend with ethical issues. I don’t really think that way, so it’s intriguing.”

He and Christian Argenti, both mechanical engineering majors, said they read the course description, and swiftly convinced two additional engineering students in their fraternity, Delta Kappa Epsilon, to take the course with them.

In one class, they had delved into the ethical treatment of animals. A showing of the 1949 French documentary, "Le Sang des Bêtes" ("Blood of the Beasts"), featured the unvarnished butchering of horses, cattle, and sheep at a slaughterhouse.

“There isn’t any attempt to make the killing ambiguous,” Ritvo said about the film. “What does it suggest about how things are perceived differently in different times and places?” Debate had ensued around their MIT seminar table as the scent of hyacinths drifted in from a nearby window overlooking the Charles.

Marcus Urann, a junior studying mechanical engineering, appreciates such moments of dialogue. “You can get lost in the mix in engineering. We have large classes with hours of lectures. In this class, we meet weekly and discuss issues in depth,” he said. “It gives you a way to voice an opinion.”