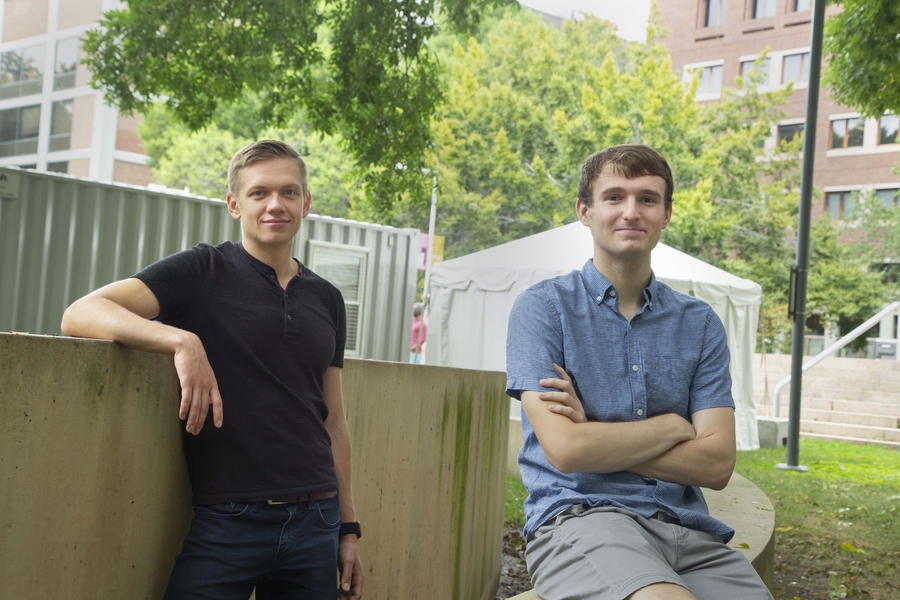 Mechanical engineering students Ivan Goryachev and Ryan Koeppen ’19 are developing a thermal trailer and subsequent kiosks that could be deployed on campus during the Covid-19 pandemic.

When MIT announced plans to welcome back some undergraduates, ramp up research operations, and increase the number of staff on campus this past fall, its administration was faced with the challenge of doing so in a way that minimized the risk of an outbreak on campus. In typical MIT fashion, several teams of engineers and researchers started designing and building solutions to protect the campus community.

Over the summer, a cross-departmental team of researchers worked together to launch a Covid-19 testing trailer outside MIT Medical that could test up to 1,500 people a day. A second trailer was placed next to the testing trailer to complete an initial thermal scan for patients’ temperatures.

“The thermal trailer builds on the research efforts ongoing in my lab, to make multiple types of non-contact measurements of humans in home and natural environments,” explains Brian Anthony, principal research scientist and director of the Device Realization Laboratory.

Two graduate students in Anthony’s lab, Ivan Goryachev and Ryan Koeppen ’19, have been working alongside a team led by Anthony and postdoc Xiang “Shawn” Zhang SM ’15, PhD ’19 on the development of both the thermal trailer and subsequent kiosks that could be deployed in other locations on campus.

“Once Covid-19 cases increased in Massachusetts, it became clear that new solutions were needed to support any on-campus operations. That’s when our team started exploring how to apply our research on non-contact vitals sensing on the current problem,” says Koeppen.

Goryachev, meanwhile, has a background in the hardware side of product design. A graduate of Northeastern University’s mechanical engineering program, he was part of the founding team at Sparx Hockey, which produces automatic ice skate sharpeners.

In June, Anthony’s team began working to rapidly deploy commercially available hardware in the thermal scanning trailer in order to measure body temperature before individuals get a swab test in the testing trailer outside MIT Medical.

“The overall idea, as explained to us by folks at MIT Medical, is to have people get pre-screened in one trailer so we could separate individuals who are obviously symptomatic and send them to a secure area inside MIT Medical to limit the chance of spread,” explains Goryachev.

The first trailer uses thermal cameras to screen for elevated temperatures. After being scanned, a message pops up on a screen indicating whether individuals can safely proceed to the swab-testing trailer or, if their temperature is elevated and verified by a second non-contact thermometer, go directly to a secure area in MIT Medical.

Zhang created the software and imaging system that combines calibrated infrared and visible cameras. The system tracks and measures a subject’s skin temperature around the eyes, which is reflective of an individual’s core temperature. It also integrates additional sensors for measuring and correcting for environmental effects such as room temperature and humidity. Goryachev built the mechanical rack and rolling setup for the camera and screen system.

As Goryachev and Zhang worked on getting the thermal scanning trailer operational, Anthony and his team began to learn about other opportunities to deploy this technology more broadly across campus.

“We started doing some preliminary work looking into how we can scale and expand what Ivan and Shawn did with the trailer down, in terms of size, cost, and added functionality, so that it’s easily deployable to other campus locations or for other use scenarios,” adds Koeppen.

The team will use low-cost off-the-shelf optical, acoustic, and radar sensors and thermal cameras to outfit the kiosks. Their goal is to initially deploy a thermal screening system to support current campus needs, with scalability to integrate more sensors for additional signals, including heart rate, breathing rate, and blood oxygen saturation, giving a more complete picture of an individual’s physiological state.

“Typically, to get robust information on heart rate and breathing rate, there needs to be some kind of contact with a patient,” explains Koeppen. “If you can measure this data in a robust way with sensors that don’t require contacting the patient, it would be a novel development in terms of the use of sensors in medicine.”

In addition to outfitting the kiosks with low-cost sensors, the team focused on developing a design that can be manufactured in a scalable way. Goryachev has been working with a company that can take CAD designs and ship pre-cut pieces for easy assembly.

“We are trying to find a balance of making sure the kiosks have enough security for the components inside while also creating something that is inexpensive and really easy to put together,” he adds.

The team envisions different scenarios where a self-service human assessment kiosk could be used in support of campus needs during the Covid-19 pandemic, such as rapid daily screening at entrances or for quantified self-attestation. The kiosks will also help explore novel non-contact sensors and their uses in health and wellness.

“It’s not every day you have the opportunity to develop systems that will collect human data from potentially thousands of people in a relatively controlled and fast way,” says Koeppen. “We have a chance to develop our engineering and human-centric design skills, and help campus.”

For Koeppen, one of the biggest takeaways from the trailer and kiosk projects has been how many people have been willing to help. “People see the immediate need we are addressing with our work, so everybody has been willing to jump on board and get involved,” he adds.