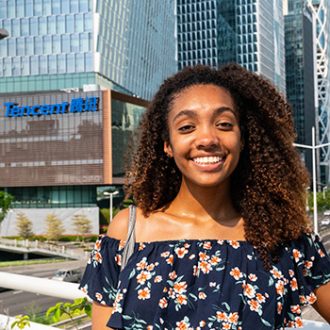 A passion for both human and machine languages leads to a MISTI internship in Shenzhen, China for Virginia Adams ’18

Video and photo by Lillie Paquette; Written by Carolyn Blais

“Learning a new language gives you a window into someone else’s world,” says Virginia Adams, who graduated from MIT this past May. For Adams, learning Chinese has given her a glimpse into a fascinating, fast-paced culture where technology is rapidly advancing. As a MIT International Science & Technology Initiatives (MISTI) intern at Tencent, a large technology company in Shenzhen, China, Adams hones her ability to communicate with her Chinese co-workers and friends in order to better build the programs that instruct computers to communicate.

At Tencent, Adams works on the WeChat application—sort of like Facebook but with several more capabilities. She is helping to create a chatbot for WeChat that will hopefully have the ability to not only converse with users but help them complete tasks like buying train tickets. “Trying to get computers to understand natural human language is the part of computer science that I like the most,” Adams says.

After a day of work, Adams and the rest of the semantics and analysis team head to a group dinner. It’s these everyday experiences and encounters that aid Adams in her work. “I want to immerse myself as much as possible,” she says.