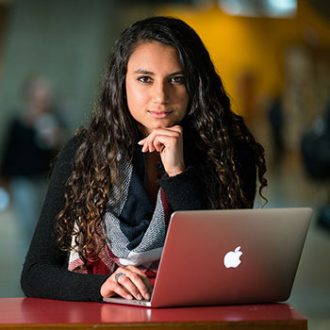 Annamarie Bair, a premed student turned computer science major, is drawn to the promise of artificial intelligence and health care.

Senior Annamarie Bair was determined to become a medical doctor when she arrived at MIT from the Midwest nearly four years ago. She was fascinated by neuroscience but had yet to channel that passion toward what became her true focus: artificial intelligence and health care.

“I remember joking to my friends in Michigan to watch out, I might return from MIT a computer science nerd. And guess what, it’s happening,” she says. Bair will graduate this Friday with a degree in computer science and engineering and then go on to a summer internship at Microsoft.

Today she shrugs off past certainties with a laugh. “One thing I’ve learned at MIT is that you have to be willing to change course,” she says, describing an intellectual journey influenced by pivotal classes, influential professors, graduate student mentors, friendships, internships, and the overall atmosphere produced by a “community of passionate people.”

“Everyone at MIT has something they’re really passionate about, and it’s not even necessarily engineering,” she says. “It’s cool to see what makes people tick. You can touch on a lot of subjects and people can be interested, but when you hit on something they really care about, their eyes light up, and you’re like, ‘Wow, this is it. They’re going to do great things in this area.’ Without fail, everyone at MIT has this passion, even if they are still finding it in themselves.”

Several weeks into her second semester at MIT, Bair realized via an introductory computer science course that she had an unexpected passion for ideas in the field. “It felt like a different way of thinking than I'd seen before — but also mirrored ways I thought,” she says. “I wanted to learn more about it. And I just kind of couldn't stop.”

Her classes inspired reading about AI and consciousness. She loved exploring theoretical problems in both computer science and neuroscience. As a senior, Bair dove into an Advanced Undergraduate Research Opportunities Program research project, or SuperUROP, in the lab of Peter Szolovits, an MIT professor of computer science and engineering and head of the Clinical Decision-Making Group within the Computer Science and Artificial Intelligence Laboratory (CSAIL). The group focuses on applying machine learning methods to health care and medicine.

“We’re looking at gene expression data,” she says with excitement. “We’re using machine learning methods to track impacts on gene expression. We’re ultimately providing a tool for biological researchers to more easily identify which genes to focus on and where they should target research in the future.”

When Bair envisions a future career, her thinking is more flexible than it once was. She plans to return to MIT in the fall to do graduate work in the lab of Szolovits. After that, she will see.

“I think it might be nice to go into industry research. I know of research projects at Microsoft, Facebook, and Google that look cool,” she says. “I’d like to get a PhD and go toward that. All I know is that I want to work on machine learning and health care research, and have the resources to do that and make a difference.”

There is a sense of abundance in Bair’s summary of her personal experience of MIT. “I learned that while a single-minded focus was good to get me into MIT, I needed to expand once I got here.” She joined the Kappa Alpha Theta sorority and played a leadership role in it. She thrived during two summer internships: the first in mobile web development at The New York Times, the second at a tech startup in San Francisco that connects cancer patients with access to clinical trials.

“MIT pushed me in ways that I never imagined, and that has made me the person I am today,” she says. “MIT made me realize that real learning is about more than technical problems. The impact of this place comes with the conversations and experiences and knowing so many people who are doing interesting things.”

She smiles at the contrast between who she believed herself to be when she arrived at MIT in the fall of 2014, and who she has become. “You get this feeling of cutting-edge stuff going on here. It changes you. I could never imagine myself as anything but a doctor when I was in Michigan. Now look at me. I’ve become a real computer science nerd. And I’m cool with it.”