Home>> Connect>> Engineering in Action>> After MIT, New Officers Will Serve Their Country 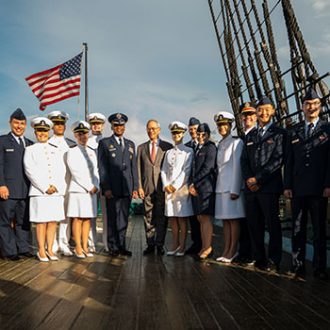 After MIT, New Officers Will Serve Their Country

Following their MIT studies, graduates in MIT’s Reserve Officer Training Corps set off on new challenges in the U.S. military.

Video and photo by Lillie Paquette; Written by Meg Murphy

A few hours after they received their MIT diplomas on the Institute’s famed Killian Court, 12 young women and men stood on the deck of the USS Constitution to receive commissions in the U.S. military. “You embody the best of MIT,” MIT President L. Rafael Reif told the new crop of surface warfare officers, pilots, flight officers, reactor and developmental engineers, ordnance officers, aircraft maintenance officers, and medical physicians.

Joined by family and friends, who would later assist in affixing the cadets’ newly minted insignias, the graduates of MIT’s Reserve Officers Training Corps (ROTC) took their oaths of service in one of three branches of the U.S. armed services: the Air Force, Army, and Navy. The ROTC program has been active at MIT since 1865, and typically graduates a dozen new officers every year. More than 12,000 officers have been commissioned from MIT since the program’s origin, and more than 150 have reached the rank of general or admiral.

The guest of honor at this year’s ceremony was four-star Air Force General Darren W. McDew, commander of U.S. Transportation Command. “Our current environment is highly uncertain,” he told the cadets. “We need people who think critically and can bring clarity in crisis. Don’t be afraid to be bold. Lead. Don’t shy away from it. Just lead,” he said. “Do what you know is right.” McDew’s command has responsibilities for air, land, and sea transportation for the Department of Defense and ultimately delivers national objectives on behalf of the president of the United States.

As the sun set, flags whipped in the wind, and a military band played, the cadets pledged to faithfully serve and defend the Constitution of the United States against all enemies, foreign and domestic. Each cadet was then called “front and center” to receive a badge of military rank, pinned in place by parents or siblings, duty stations were announced, commissioning scrolls presented, and first salutes delivered to a mentor of the cadet’s choosing.

Now they are off to new challenges.

Air Force Second Lt. Martin York ’17, SM ’17 will head to Sheppard Air Force Base in Texas to begin training in a Euro-NATO joint program for jet pilots. “NATO has always been important,” said York, an aeronautics and astronautics graduate and the 2016 U.S. Air Force Cadet of the Year. “It’s great that we train with people from different countries, such as the Germans and the Dutch. We build a joint atmosphere so that if we were to fly and fight together, we have a strong starting place and connection.”

For Navy Ensign Natalie Shifflet ’17, the future involves a career as an electrical officer aboard the USS Gonzalez in Norfolk, Virginia. “I don’t know much about what that role is going to entail,” said Shifflet, who received the details of her posting the day before. “But I’m looking forward to new opportunities and working hard.”

For Shifflet, who majored in nuclear science and engineering, the assignment marks the first major separation from her twin sister, Monica Shifflet ’17, who studied materials science and engineering. Monica has been assigned to flight school in Pensacola, Florida. “Just growing up we’ve done the same activities,” said Natalie. “It’s always been where the road has taken us. And now the road is taking us in two different directions.”

The 2017 MIT graduates commissioned into the services include:

Ensign Vardaan Gurung, U.S. Navy: A graduate of the Department of Aeronautics and Astronautics, Gurung will be a naval reactors engineer reporting to the Navy Yard in Washington.

Second Lieutenant Joseph Han, U.S. Air Force: A graduate of the Department of Biological Engineering, Han will join the medical service corp and begin medical studies at the Icahn School of Medicine at Mount Sinai.

Ensign Sean Lowder, U.S. Navy: A graduate of the Department of Nuclear Science and Engineering, Lowder will be a naval reactors engineer reporting to the Navy Yard in Washington.

Ensign Colleen McCoy, U.S. Navy: A graduate of the Department of Mechanical Engineering, McCoy will be a naval reactors engineer reporting to the Navy Yard in Washington.

Second Lieutenant Jason Morrison, U.S. Army: A graduate of the Department of Political Science, Morrison will be an ordnance officer serving in the 3rd Cavalry Regiment in Fort Hood, Texas.

Ensign Julia Rubin, U.S. Navy: A graduate of the Department of Materials Science and Engineering, Rubin will be a surface warfare officer on the USS The Sullivans in Mayport, Florida.

Ensign Monica Shifflet, U.S. Navy: A graduate of the Department of Materials Science and Engineering, Shifflet will be a naval flight officer attending Flight School in Pensacola, Florida.

Ensign Natalie Shifflet, U.S. Navy: A graduate of the Department of Nuclear Science and Engineering, Shifflet will be a surface warfare officer on the USS Gonzalez in Norfolk, Virginia.

Second Lieutenant Martin York, U.S. Air Force: A dual bachelor's and master's graduate in the Department of Aeronautics and Astronautics, York will be a pilot at the Euro-NATO Joint Jet Pilot Training at Sheppard Air Force Base in Texas.