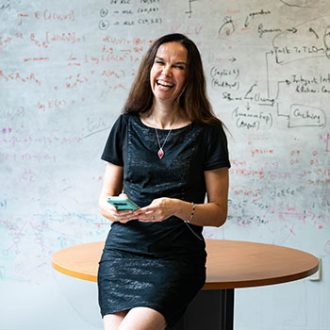 3Q: Muriel Médard on the World-altering Rise of 5G

“The reason 5G is so different is that what exactly it will look like is still up in the air. Everyone agrees the phrase is a bit of a catch-all.”

The rise of 5G, or fifth generation, mobile technologies is refashioning the wireless communications and networking industry. The School of Engineering recently asked Muriel Médard, the Cecil H. Green Professor in the Electrical Engineering and Computer Science Department at MIT, to explain what that means and why it matters.

Médard, the co-founder of three companies to commercialize network coding — CodeOn, Steinwurf and Chocolate Cloud — is considered a global technology leader. Her work in network coding, hardware implementation, and her original algorithms have received widespread recognition and awards. At MIT, Médard leads the Network Coding and Reliable Communications Group at the Research Laboratory for Electronics.

Q. People are hearing that 5G will transform industries across the world and bring advances in smart transportation, health care, wearables, augmented reality, and the Internet of Things (IoT). The media report that strategic players in the U.S. and internationally are developing these technologies for market by 2020 or earlier. What sets this generation apart from its predecessors?

A. The reason 5G is so different is that what exactly it will look like is still up in the air. Everyone agrees the phrase is a bit of a catch-all. I’ll give you some big brush strokes on 5G and what people are looking at actively in the area.

In the second, third, and fourth generations, people got a phone service that by 4G really became a system of phone plus data. It was all fairly traditional. For instance, people are used to switching manually from their cellular provider to available Wi-Fi at their local coffee shop or wherever.

One of the main ideas behind 5G is that you’ll have a single network that allows a blended offering. People are looking at using a multi-path approach, which means drawing on Wi-Fi and non-Wi-Fi 5G (or sometimes 4G) seamlessly. This poses some difficult coordination problems. It requires network coding, by using algebraic combinations, across different paths to create a single, smooth experience.

Another important part of 5G is that people are looking at using millimeter waves, which occupy frequencies that are high enough to avoid interference among multiple senders that are transmitting simultaneously in fairly close proximity relative to what is possible now. These high frequencies, with wide open spectrum regions, may be well-suited for very large amounts of data that need to be transmitted over fairly short distances.

There is also what people call “the fog,” which is something more than just how people feel in the morning before coffee. Fog computing, in effect, involves extending cloud capabilities, such as computing, storage and networking services, through various nodes and IoT gateways. It involves being able to draw on the presence of different users nearby in order to establish small, lightweight, rapidly set-up, rapidly torn-down, peer-to-peer type networks. Again, the right coding is extremely important so that we don't have difficult problems of coordination. You must be able to code across the different users and the different portions of the network.

Q. You’ve described 5G as actively looking at incorporating services and modes of communications that have not been part of traditional offerings. What else sets it apart?

A. Let’s talk about global reach. With 5G, people are looking at incorporating features, such as satellite service, that are seamlessly integrated with terrestrial service. For this, we also really need reliance on coding. You can imagine how there is no way you can rely on traditional coordination and scheduling across satellites and nodes on the ground on a large scale.

Another thing that makes 5G so different from other evolutions is the sheer volume of players. If you were talking about 3G or 4G, it was pretty straightforward. Your key players were doing equipment provisioning to service providers.

Now it’s a very busy and more varied set of players. The different aspects that I’ve talked about are often not all considered by the same player. Some people are looking at worldwide coverage via satellite networking. Other people are looking at blending new channels, such as the millimeter wave ones I referred to earlier, with Wi-Fi, which basically requires marrying existing infrastructure with new ones.

I think finding a coherent and central source of information is a big challenge. You have the organization that governs cellular standards, 3GPP, but the whole industry is transforming as we watch in the area of 5G. It’s not clear whether it’s going to be 3GPP still calling the shots. You have so many new entrants that are not necessarily part of the old guard.

Q. What do you believe people will notice on a daily level with the rise of 5G?

A. I’ll give you my vision for the future of 5G, with the caveat that we’re now moving into an area that is more a matter of opinion. I see heterogeneity as part of the design. You're going to have a network that is talking to a large and disparate set of nodes with very different purposes for very different applications. You’re going to see a view that emphasizes integration of existing and new resources over just the deployment of new resources.

And I think the people who are going to win in 5G may not be the same players as before. It will be the company that figures out how to provide people with a seamless experience using the different substrates in a way that is highly opportunistic. It has to be a system that integrates everything naturally because you cannot preplan the satellite beam you're going to be in, the fog network you're going to be in, and the IoT devices that are going to be around you. There is no way even to maintain or manage so much information. Everything is becoming too complex and, in effect, organic. And my view on how to do that? Network coding. That’s an opinion but it’s a strongly held one.