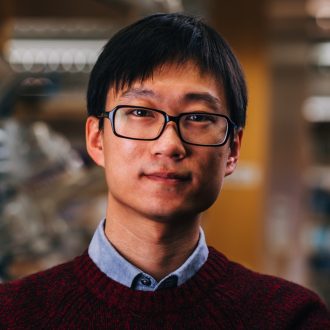 Ming Guo joined the faculty in Mechanical Engineering in August 2015. He received a BE and ME in engineering mechanics from Tsinghua University, and an MS and PhD from Harvard University. His doctoral research investigated the mechanical and dynamic properties of living mammalian cells, with an emphasis on intracellular mechanics and forces, the mechanics of cytoskeletal polymers, the equation of state of living cells, and the effect of cell volume and intracellular crowding on cell mechanics and gene expression. Guo discovered that there is a direct relationship between cell stiffness and volume. By varying the cell volume through a number of different techniques, he showed that the volume of cells is a much better predictor of their stiffness than any other cue, and he developed a method to measure the mechanical properties and overall motor forces inside living cells by monitoring the fluctuation of microbeads inside the cells and delineating the timescales under which the contribution of active cellular processes could be distinguished from passive mechanical properties.