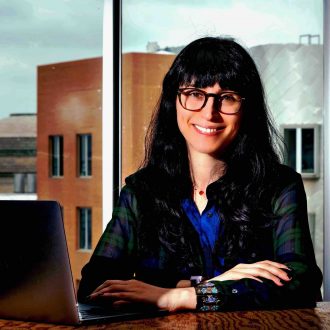 Manya Ghobadi joined the Department of Electrical Engineering and Computer Science as an assistant professor in October. Previously, she was a researcher at the Microsoft Research Mobility and Networking group. Prior to Microsoft, she was a software engineer at Google. Ghobadi received her PhD in computer science at the University of Toronto and her BEng in computer engineering at the Sharif University of Technology. A computer systems researcher with a networking focus, she has worked on a broad set of topics, including data-center networking, optical networks, transport protocols, network measurement, and hardware-software co-design. Many of the technologies she has helped develop are part of real-world systems at Microsoft and Google. She was recognized as an N2women Rising Star in networking and communications in 2017. Her work has won the best dataset award, Google research excellent-paper award (twice), and the ACM Internet Measurement Conference best-paper award.