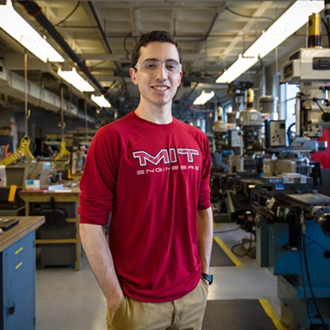 Getting a Leg Up on Engineering

MIT senior will use Marshall Scholarship to work on devices that enhance mobility for the disabled.

Matthew Cavuto, now a senior in MIT’s Department of Mechanical Engineering, embarked on his career path partly as a result of a talk he heard in high school by MIT Professor Hugh Herr, a double amputee who works on improving prosthetic devices and systems to allow people with similar disabilities to regain as much control, independence, and capability as possible.

Herr “gave an awesome talk about the work he was doing in his field. … It both piqued my interest in MIT and made me want to tackle similar problems in my studies,” Cavuto recalls.

Now, thanks to a Marshall Scholarship that will provide him with two years of graduate studies in England, Cavuto will be taking that interest to the next level. He plans one year of work at Imperial College London, with one of the world’s leading research teams on providing sensory feedback to users of prosthetic limbs, and then a year at Cambridge University with a leading team developing devices known as exoskeletons, to restore mobility to patients with paralysis.

Cavuto knows a thing or two himself about graceful, highly controlled mobility: He spends his free time in high-level competitive ballroom dancing and varsity fencing, two very different but equally demanding disciplines that are based on precision movement.

Even as an undergraduate, Cavuto has made some significant progress in providing mobility for some amputees in developing countries. Working with MIT’s GEAR (Global Engineering and Research) Lab, under the guidance of Amos Winter, an assistant professor of mechanical engineering, Cavuto has developed a patent-pending artificial knee device that allows above-the-knee amputees to cross their legs, something that typical prosthetic legs do not allow. In India, being able to sit cross-legged is an important part of being able to participate fully in society and is even a requirement for some kinds of work, he explains.

That project will be going through a second round of field testing in coming months in India, after initial tests last year of an earlier version. The tests are focused on developing a system that would be affordable to low-income users, durable enough to provide years of service, and simple enough that its users could learn to repair and maintain the device on their own. “The challenge is to design devices that can be made for a much lower cost, but that are still as robust and functional as those in the developed world,” Cavuto says. And such solutions, once successful, “can also apply to the developed world,” where costs still do make a difference, he says.

The prosthetic device he designed, which works with an existing knee joint and is not a knee itself, is intended to be something that could sell for just $10, and consists of just five parts that a user can take apart, clean and maintain, and reassemble. Comparable prosthetic knees in the developed world cost “anywhere from hundreds to thousands of dollars,” Cavuto says. Part of the savings comes from replacing materials such as titanium with less expensive aluminum or plastic, and from the inexpensive yet durable custom locking mechanism he designed. His work on that project, and the associated fieldwork in India, was made possible by funding through the MIT International Science and Technology Initiatives (MISTI) program and MIT’s D-Lab.

Cavuto’s mechanical skills — as well as his fencing and dancing skills ­— go way back. He has enjoyed woodworking since the fourth grade and over the years has made much of the furniture in his family’s home in Skillman, New Jersey. He has won prizes for his woodworking designs, and one of his creations is in the collection of a museum in Pennsylvania.

His interest in fencing started in fifth grade, and in high school he competed in that sport in the Junior Olympics. He has continued his competitive fencing on a team at MIT as a squad leader. In ballroom dancing, he has participated in many national competitions, including the annual MIT Open, which is the largest collegiate ballroom dancing competition in the world, he says. Dancing all 10 categories of standard and Latin dances, he competes with his dance partner at the highest amateur level in the U.S.

Cavuto’s parents are both doctors — in fact, “almost everyone in my family is a doctor,” he says — and he initially considered going into that family business. But he decided that becoming an engineer and designing biomedical devices offered the possibility of impacting many more lives than would be possible by treating one patient at a time.

His tentative goal at this point is, after completing the two master’s programs under his Marshall Scholarship, to pursue a doctorate, perhaps at MIT, and ultimately to become a professor. “Through inspiring and guiding the research of students, as a professor or head of a lab, I could accomplish far more than through pursing my research alone,” he says. Furthermore, based on his experiences working as a teaching assistant in mechanical engineering classes, including the very popular Course 2.007 (Design and Manufacturing) that culminates in a robotic competition, “I’ve also realized my passion for teaching,” he says.

Cavuto is looking forward to the work he will be doing next year on providing sensory feedback for prosthetic limbs. The lack of such feedback “is definitely a big bottleneck” in the development of better prosthetics, he says. Even with a prosthetic hand that provides highly precise control over movement, in order to perform complex tasks — or even simple ones like picking up a delicate object — feedback is important. Without it, users must watch all their movements closely and constantly. “The goal is to be able to pick up a pear without bruising it, or a plastic cup without crushing it,” he says.